Founded in 2003, Clanwarz.com has rapidly become a predominant name in the game and voice server industry. With expertise in Linux and Window server platforms, Clanwarz has taken scripting and automation to another level, while delivering bleeding edge technology and performance to their clients. Music Bots for Teamspeak and Discord has been added to the menu! Clanwarz is known for creating instant gaming and voice service worldwide with the Best Custom Voice Control Panels on the market today. 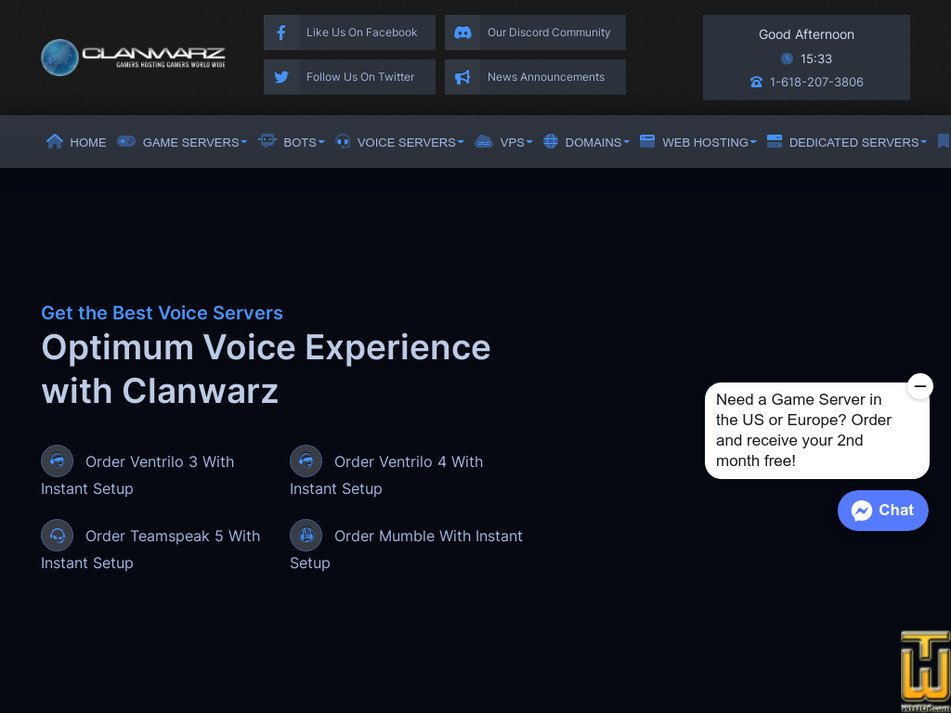 Apr 26, 2021 - Need a voice server? We have them all! Use discount code 'save25now' to save a cool 25% on your first order.… more info!
No website coupons announced! Looking to get a great webhosting deal using vouchers ? Checkout our current web hosting coupons list!
If you manage this brand, you must be logged in to update your promotions!
You can directly submit your coupon here!

Amazing teamspeak 3 hosting have a 100 slot server and was having problems with getting my custom domain to point to the teamspeak and a support member gladly joined my teamspeak and helped me through everything to fix my problem. Amazing experience in all forms!
Ethan ( sainttdr@o... ) / equitylifea3.com
You can directly submit your testimonial here.

Add your own testimonial

This form is used exclusively for positive feedback, for a regular review click here

The quick stats of Clanwarz profile shows a note average of 8.9 out of 10, counting 105 opinions. (few listed on the top of the page)
As visitor you can rate this provider directly here! If you are part of support team, you can respond to these reviews by going to login

Add your own review [Toggle to basic/advanced form]

Now its all fixed, Jay aka Superman, showed all my info and what was wrong and how he fixed it.

Jay was very good at explaining, and spoke a nice and calm, so i could clearly understand it all, even thou English is second language.

Thanks for great support...

We run our hole alliance on them.
51 out of 57 users found this review to be helpful!
Did you find this opinion useful? YES / NO
-anonymous- (ggohdyn@g...) / ts3 server @ tsservers.com
Time Hosted: over 3 years
Global rating
Tried 3 other hosting providers for TS3 in the past, Clanwarz has absolutely been the best.

Low cost, good and responsive support when needed, hassle free service and rarely a hickup = a happy Fodder.
68 out of 76 users found this review to be helpful!
Did you find this opinion useful? YES / NO
-anonymous- (pcharij@g...)
Time Hosted: 2 to 3 years
Global rating
Great customer service.

Someone was DDOSING our server and he moved it to a more secure place.

Clanwarz will not admin your services. With their easy control panels, we can even reinstall the server if we totally screw up, over and over again.

Regarding the TeamSpeak server:
Jay (the owner) opened a support ticket where he said:
"You had a 15 man server for the past 9 months.
You only paid for 10 slots.
All the help I gave you for free, at least you could of told me, no?
Pay the bill and your service will go back online after you update this ticket."

Would definitely recommend!
53 out of 65 users found this review to be helpful!
Did you find this opinion useful? YES / NO
Martin Sørensen (benny1@h...) / wnfa.eu
Time Hosted: under 1 month
Global rating
Features
Cost
Customer Relation
Control Panel
Very bad support
So I fount clanwarz on google and decided to try to write to them...

So I asked about their danish location of servers and how much DDoS protection they had - I have a lot of experience with game servers that are down all the time because of DDoS. First of all the support didn't answer any of the questions I asked and then he just said: Have a nice day - and closed the chat. I tried to open the chat again and he wrote the same to me within seconds I couldn't even respond - then he blocked me totally out and the chat said: You have been blocked from the chat.

So now I just have to say I haven't tried anything like this before - just blocked new customers... Don't EVER buy a server from here of you want great support - oh I forgot to mention that when I asked about their danish location he actually told me that it was in Sweden and not in Denmark - they just put in Denmark so that people from Denmark would buy from them.

They refuse to help, answer any questions, the control panel is confuse.

After all i don't recommend, please run away from this company. Not worth save 10 dollars to stay with company that is not reliable.
75 out of 81 users found this review to be helpful!
Did you find this opinion useful? YES / NO

Clanwarz -vs-
techark.com
These Clanwarz testimonial(s) and rating(s) are the subjective opinion of our visitors and not of whtop.com staff.
Trademarks, logos & names are properties of their respective owners and protected by law.